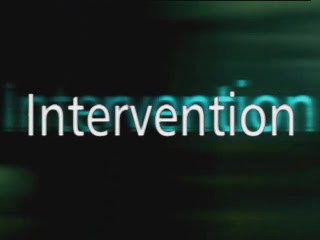 Intevention is an Emmy award winning show on A&E.

Jeff VanVonderen is one of the interventionalists on the show, has 25 years worth of experience and is the author of 5 books.
And he was on Bryan's an my flight from Altanta to Orange County.
Not only was he on our flight...
For sitting directly in front of us was a cameraman, a young girl and a woman who accompanied her.
The woman who accompanied the young girl and I spoke when they 1st got on the plane.
She told me that her seat was next to me (she was the window, I the middle, Bryan the isle), but that she had to sit with the young girl, so she was going to switch seats with whoever was suppose to have the seat next to the young girl.
I joked that that wouldn't be a hard sell, as she was trading her window for their middle.
And that was the extent of our conversation.
Bryan and I just assumed that the young girl was mentally ill or couldn't take care of herself, as she looked pretty out of it.
Bryan mentioned that maybe they were from Intervention, but I shot him down real fast, saying that she was too calm for that.
Bryan and I, more-so me, were pretty interested in this whole thing. Bryan more-so interested in watching Monday Night Football on our personal tv's -- thank you for free wifi and tv's in December Delta!
It was a 5 hour flight, so it provided a bit of activity to get me though...
The cameraman and the woman who accompanied the young girl, I'll refer to her as her handler (because it became obvious that that's exactly what she was), switched seats often.
The cameraman shot footage the young girl looking out the window and that's it.
The handler approved 2 alcoholic beverages for the young girl on the flight.
1 came from Mr. VanVonderen, who was sitting in 1st class, and who got a Heineken for her for free because of it.
A couple hours later the cameraman, who was sitting next to the young girl at the time, whispered across the isle to her handler, saying that the young girl wanted another drink and asked for permission.
She got permission and requested Cognac.
Really... Cognac? On an airplane?
Well shocking, but they didn't have it, so she settled for whiskey and Coke.
The young girl, who was sitting at the window looked back at me thru the crack of her seat and the middle seat often.
I ignored it, but it made me a little uncomfortable.
It was like she was embarrassed because we were around the same age.
She was so calm and quiet.
She never moved.
The young girl looked very troubled, insecure and disheveled.
I figured they were filming a documentary of sorts.
But once we landed and Mr. VonVanderen stood up in 1st class, a women behind us said very loudly, "Oh my God -- that's the guy from Intervention. Do you think someone's strung out on this flight?"
I flung my head around so fast and gave her the death stare.
I mean, how rude!
That poor young girl was close enough to hear and my heart just broke for her.
So...
I've never seen the show before, but I've heard a lot about it.
It's supposed to be very emotional.
Now that I've seen it from this side, I'm very interested in following the show and watching this young girls episode.
I really hope she gets the help she needs.
Her family must have been desperate to have taken these measures the week of Christmas.
*My point of sharing this*
Whatever you're going through this holiday season -- no matter how hard or sad or emotional -- be thankful that you don't have someone behind you yelling out your problems to the world!