Yay, today's a fun holiday meant for hitting the sales and then BBQing with friends! 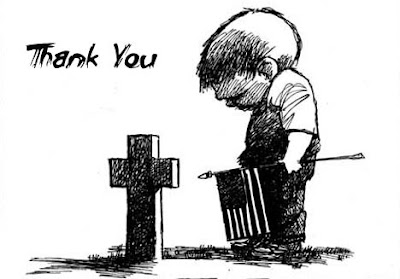 Are we confusing Memorial Day with Veterans Day?


I reached out to my friends who have served/continue to serve our country and asked them how they feel about Memorial Day.


Specifically, what this day means to them and what it should mean to all of us.

Rik who served 1999-2003 2/75 Army Ranger Regiment said:
I think I view Memorial Day differently than most. I have lost a few friends to the war, even my roommate, so I think of them a lot during this weekend. I think it is good that people get out and have fun. That is the freedom for which so many have fought and died for in this country. But I would like those people to remember why they have this holiday and stop and think about those who have paid the ultimate price.

Chase who served and is currently serving 5 years as an infantryman in the Army National Guard said:
To be honest with you, I personally look at it as a holiday for my efforts honoring those who have given everything.

John has served 10 years, Artillary Captain in the Marines Corp. His wife, Laura said:
Memorial Day has taken on a new meaning after marrying John... it's a bittersweet day, but a day filled with more than fun BBQs. Over his time here, John has had to notify three families that they lost their sons/husbands over in Afghanistan and that hit really close to home for us all three times. Last year, John was asked to speak at a ceremony at a cemetery on Memorial Day and he spoke about those three that gave their lives serving our country. You see how much they and their families have sacrificed and whether I believe in the war, it really makes me so emotional and I want to give them the respect they deserve. So, we probably will grill out if it's nice, but I know for a fact that every Memorial Day we will make a point to go to a ceremony wherever we live in order to give honor to those who made the ultimate sacrifice. Even just hearing the national anthem brings me to tears these days because I think of all the men that believe in our country and fight hard for our freedoms. I can go off about how much it angers me that our news reports were obsessed with the stupid wedding in the UK, but have now stopped really covering the stories of the men and women that still are losing their lives or getting badly injured fighting over in Afghanistan. UGH! I loved how so many people rallied together in support of America and excitement for our country when they killed Osama, but that died down so quickly... it's just sad. That motivates me to want to make sure that at least me and my family will never forget those still fighting. I have friends who just sent their husbands over there for 9 month deployments.

Travis who served 2004-2011: Iraq 2007-08, Afghanistan 2010 said:
I think yes, but not the way most people do. Veterans day should be a party. Memorial Day should be a bit more somber in my opinion. Its not time to get drunk and scream about being an American. It's more reflective for me. This year I'll be at work (police officer), but when I get home at 4am I'll be having a beer for my buddies that didn't come home...