On Wednesday night Cali came close to fading away.

It was, without a doubt, one of the most frightening things I've ever witnessed.
My mama bear adrenaline was flowing and I flew into action.
I called the animal hospital, but they were closed for the night.
I googled emergency vets in my area and received no results.
What else do you do in a mad panic?
You call your mom.
And that's exactly what I did.

Through my tears I explained Cali's symptoms:

Vomiting: she vomited 4 times in a period of 10 minutes
Exhaustion: she could hardly move and when she did she would immediately callapse
Heavy, heavy breathing: her chest cavity was thumping like never before
Pounding heart: her little heart was pounding out of control
Shortness of breath: she was gasping and in distress
Very thirsty: everytime I gave her water she devoured the bowl
Listless: so, so weak
Agitated: she kept itching her face uncontrollably and in a really hard, abrasive manner

Maybe she got bit by a debilitating bug?
Maybe she has an allergy?
Maybe she ate something and was poisoned?

My mom listened to the symptoms I rattled off and thought fast.
She told me to run. Fast. And put a towel in cold water and cover her with it.
At this point Cali had made her way under our kitchen table.
A place she'd never laid before.
I quickly ran into the kitchen, grabbed the closest towel and flooded it with cold water.
I then rushed to my poor, lifeless girl and quickly covered her in this towel.
I pleaded with Cali and refused to let her close her eyes.
My mom remained on the phone, telling me to "sweet talk" Calz.
Sweet talking comes easy when your pup is such a little sweetie.
But it was clear she was still in distress.
I kept pressing the wet towel softly onto her body, slowly wrapping her in it.

Before my very eyes I witnessed something so beautiful.
My girl was coming back to me.
Her heavy breathing was subsiding and her pounding heart was slowing.

My mom asked if I had Gatorade, which I did.
She told me that I should put a little bit in her water bowl, to give her a little sugar.
Cali wasn't interested in drinking anymore, but she would lick it off my fingers.
So this is what we did.

I laid on the kitchen floor with her.
My eyes and her eyes locked together.
She was so worn out.
She was alive.

As I sat on the kitchen floor beside her, Cali regained her strength.
She slowly climbed onto my lamp and made her wet self comfortable.
In this moment I realized that this condition was something that more of us need to be educated on.

Once time had passed and it was evident that she was okay, solely for educating purposes, I grabbed my camera and snapped a couple photos. 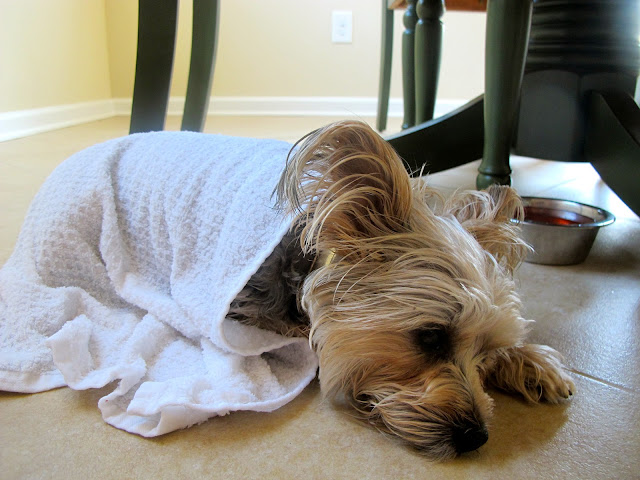 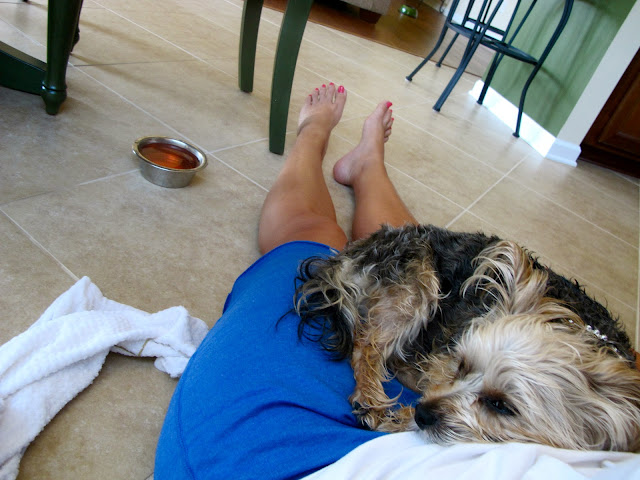 This day was NOT a hot day - low 80's, no humidity and a slight cool breeze.
It was unseasonable weather and felt more like spring than summer.
Her and I had been sitting on my front porch before all of this had happened.
Cali was in the shade, laying on the mat by my front door.
It was 7:00 pm. Not the hottest time of day.

After doing quite a bit of research on dog heat stroke, I've been enlightened.
There are several phases a dog goes through while experiencing heat stroke.
According to my research, Cali was in the final phase.
My heart just skipped a beat typing that sentence.

Dog heat stroke is actually a very common ailment, hard to self diagnose and usually fatal.

From my experience, it comes on like a freight train.
It moved through Cali's tiny body in less that 15 minutes.
Every second counts.
You have no time to drive to the vet.
You must act fast or else...

Please take the time to read the below information. I've underlined all of Cali's displayed symptoms.

"Every year, thousands of dogs suffer from heat stroke."

"In many cases, owners are not aware that their dogs are developing this condition until it is too late to reverse the damage. Immediate emergency medical treatment is necessary to prevent multisystemic organ damage, and death. Early recognition of the common signs of heat stroke is critical to saving the dog’s life."

"As a dog’s body temperature starts to rise as a result of these conditions, it cannot release the excess heat naturally produced by metabolism and other bodily functions. This, in turn, leads to the dangerous physical effects of heat stroke which, if not immediately treated, are usually fatal."

"The initial symptoms of heat stroke in dogs are characterized by unanticipated restlessness. They include physical signs such as excessive or fluctuating panting, which may start, stop and then start again. Other physical signs are excessive drooling (hypersalivation), foaming at the mouth, dry tacky gums and labored or difficult breathing (dyspnea). Among common behavioral changes are agitation, whining, barking and other signs of anxiety. As the dog’s core body temperature becomes dangerously elevated (called hyperthermia), the initial signs normally progress to include vomiting, diarrhea, confusion, lack of muscular coordination (ataxia), very red gums and uncontrolled tremors. In the end stages of heat stroke, a dog will become listless, dull, weak and recumbent. It may try to move to cool places but be unable to rise, will have increased difficulty breathing and ultimately will have seizures, collapse, lapse into a coma and die."

Within 20 minutes of her episode ending, Cali was back to her spunky, ridiculously cute self. 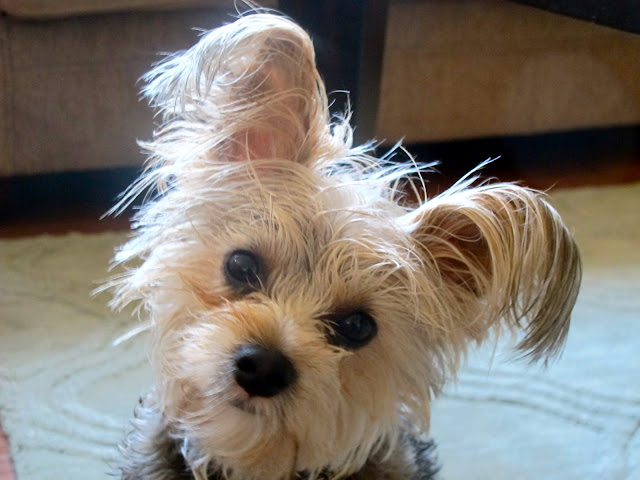 Mom,
You've always be a stickler to the rules.
Especially when it comes to the safety of others.
You would never answer your phone while driving. Never.
But because of your car accident, you were forced to get a new car.
This new car has blue tooth wireless connection.
You were able to answer the phone while driving.
And you had read about dog heat stroke just last week.
Because of all of this, you saved a life.
My babies life.
I'm forever grateful.
Thank the Lord for Dr. Mom!