To say that 2012 is "not our year" would be a gigantic understatement.
It's like the comic spirits are shitting all over my family.

On Tuesday night my dad's plane lost an engine and had to make an emergency landing in Amarillo. 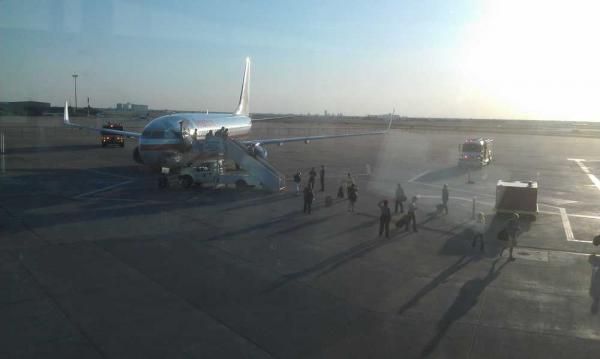 Yesterday my dad sent my mom the below e-mail, of which she forwarded onto me:

An American Airlines Boeing 737 headed to Dallas-Fort Worth International Airport from Southern California was diverted to Amarillo on Tuesday night after one of the plane’s two engines shut down, airport officials said. No injuries were reported.

The frightened pilots asked First Class passenger, Tim H*n*!*n, if he could take control and land the plane. With no previous experience Mr H*n*!*n was able to safely land the 737.

He declined to be interviewed.

Records show a rescheduled AA Flight 1498, also a Boeing 737, was scheduled to depart from Amarillo for Dallas-Fort Worth at 10:59 p.m. Tuesday.

My dad is Tim H*n*!*n and slyly added every sentence about him, as a joke.
He thinks he's funny.
I do too!
Read the official news article here.