This year has been a tough year for my family.
But July?
July has been a horrible month for my little Cali.
Earlier in the month she almost died from heat stroke.
Last week?
Um, I had just landed in Orlando and gotten to my hotel.
It was almost midnight and I was exhausted.
I texted Bryan, told him I was in my hotel room safely and that I'd call him after I showered.
Next thing I knew, my phone rang and it was him on the other end.
His first words were "I need you to sit down... Cali's okay, but I have to tell you something."
Just hearing those words I burst out in tears.
Bryan and Cals were just leaving the 24 hour emergency vet.

Cali was bit by a copperhead snake.

Bryan had taken Cali for a short walk up our street to do her biz one last time before bed, when she started to scream bloody murder.
He scooped her up and ran her home.
Bry told me that he sprinted faster than the Kenyan's in the Olympics - that's fast!
Anyway, he jumped in the car and called his mom, who found a vet open that late.
Bryan drove Cali there, with her screaming and crying most of the way.
Once at the vet, they sedated her, shaved her paw and gave her an anti-venom shot.
She was sent home with syringes full of anti-inflammation and pain meds.
Bryan said she drooled badly all night, but practically woke up to her normal self the next morning. 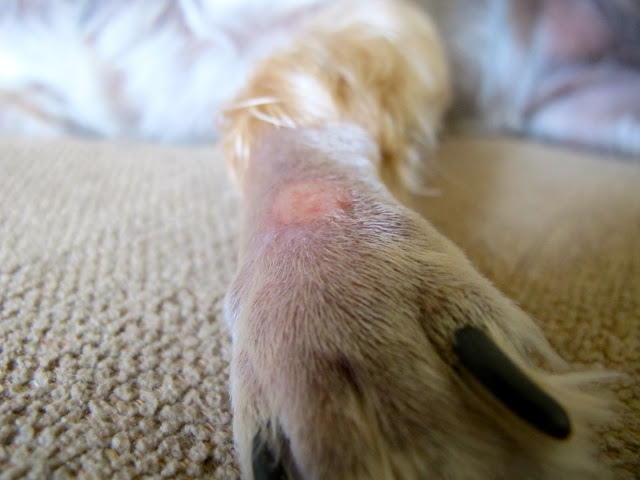 I don't know what God's trying to tell us, but there's some message here.
I mean, why is this horrible stuff happening to her?
In the future, she's not going outside much in July. I'm too scared for her.
Cali has been through so much and I am just so glad that today is a fresh start... July is finally over! 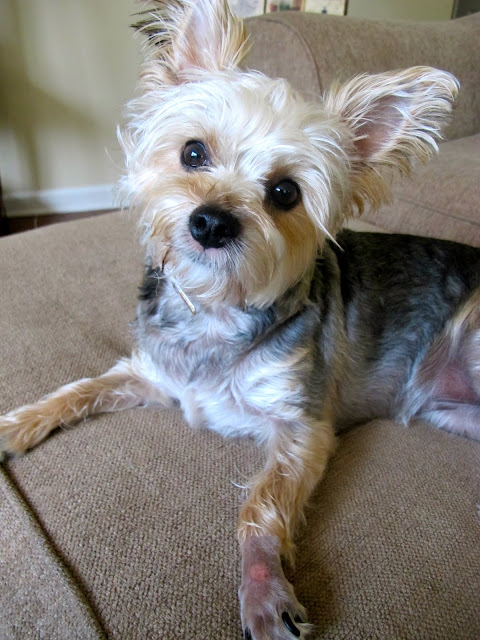 Sharyn, This time you saved my baby.
I seriously don't know what would have happened had you not just walked in the front door to Bryan calling your home phone. You acted quick and found us a 24 hour vet, a vet that we should have found after Cali's heat stroke episode. I don't know what we'd do without you. It doesn't matter how old we are, we'll always turn to our mom's when we're in need.