8 days without the husband leads to... GIRL TIME!

Once our tour ended, Bryan flew straight to California to visit his family and friends whereas I drove up to North Carolina with Cali.

Bry was gone for 8 days, so I tried to keep myself busy by packing my schedule full of what else? Girl time!

I:
went to coffee with a friend
walked with my pregnant friend (who has since had her baby)
went to lunch with another
watched The Bachelor at a girl friends house
and may or may not have drank my face off with another!

It was SO nice to catch up after being away and out of the loop for so many months -- I really don't have that many friends here in North Carolina yet, maybe a handful -- and I seriously don't know what I'd do by without them!

*Playing and hiding at my friends house. Einstein and Cali might have crushes on each other! They chased each other around for 2 hours straight! 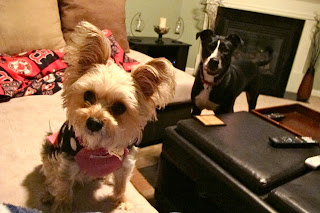 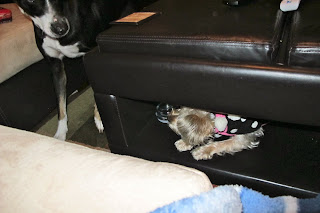 When I told Beth that Bryan was going to be in California the first week of January, a lightbulb went off in both our heads -- this is the perfect weekend for her to come visit me.

Clearly I rocked my USC zip up while Beth sported her SC hoodie. Kinda funny, no? 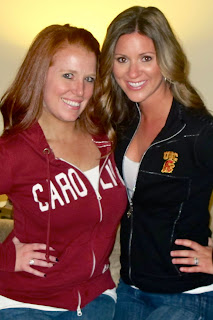 I finally got to see the letter with my own two eyes - Um, scary!! 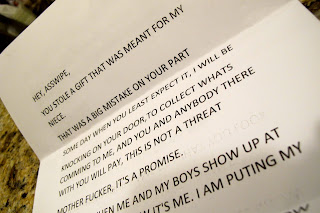 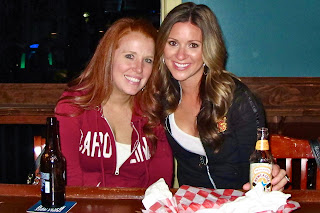 Yes, we drank 2 bottles of wine and finished the Jameson. 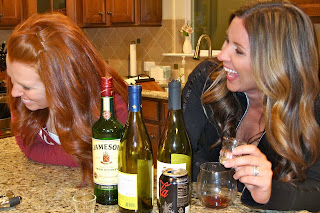 Not sure why shots were a good idea, but they were... so we broke out the whiskey and vodka! I might throw up just thinking about it... 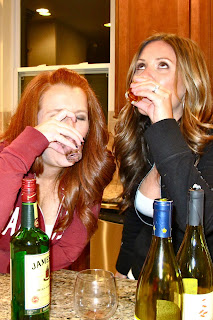 When Beth passed out... 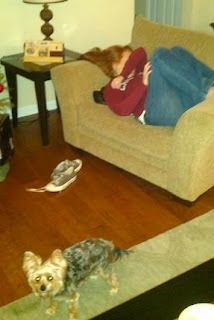 I decided it was a great idea to skype Bry... and his parents, who were in California.
Side note - my husband's hot! 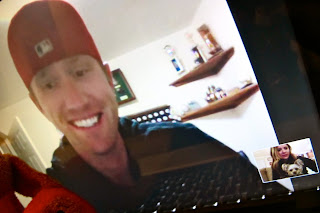 I forced Beth into her bedroom at about 1:30am. I seriously have no clue how her and I entertained each other at my house til that hour, but we did, and it was fun.

I hit the sack and last I knew Beth was comfortably sleeping away in our downstairs guest room. Little did I know she woke back up, stumbled upstairs, took a bath (even though she had a bathroom/tub next to her room downstairs) and walked around my house sans clothing.

The next morning I woke up to Beth thinking she took a bath the night before and wondering where her bra was. She was confused because the bathtub next to her bedroom was clearly not used. After looking around I found her bra hanging on my ironing board with a face towel. I also found a bath towel soaking wet hanging on the shower head in my upstairs guest bathroom. Apparently she bathed with the towel... not sure how she dried off. It was freaking hilarious!!

We also drank smoothies on my rocking chairs and played with Cali. Beth had never had so much fun in her life!

Just when I thought my overly awesome life in the suburbs was too much for her to handle, I dragged her to help me pick out original paintings from starving artists. Beth confirmed that they really were starving, so I bought two from those hungry bastards. 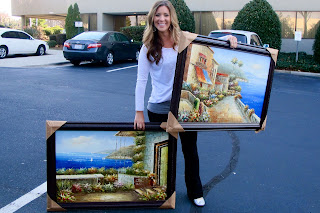 Beth was having the time of her life at this point, so I decided to kick it up a notch and show her how fun I really am! We went back home, turned on the fireplace and watched a marathon on Law and Order while curled up on couches with our throw blankets. It was awesome. Oh, lunch was on the lake and dinner was TCBY.

I'm not sure what's cuter - the mug Beth gave me or Cali napping on top of the couch!
"She's NOT a cat!" 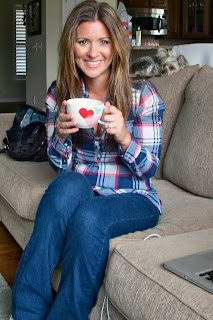 Then, as if Beth's trip to Charlotte couldn't get any more wild, I took her IKEA virginity and we ate cinnamon roles. Can you believe she had never been to IKEA before? 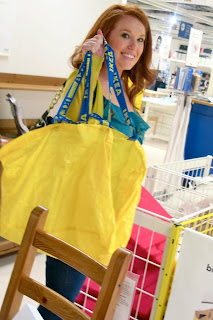 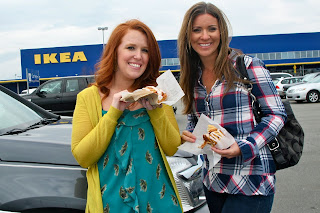 Sunday evening approached, and with the Steelers game coming on, Beth decided it was time to head back to Greenville. Boo hoo. Until next time friend...

And for your viewing pleasure I've included this beauty: