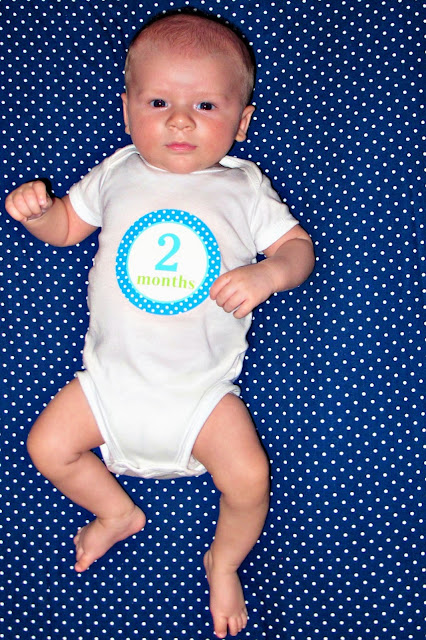 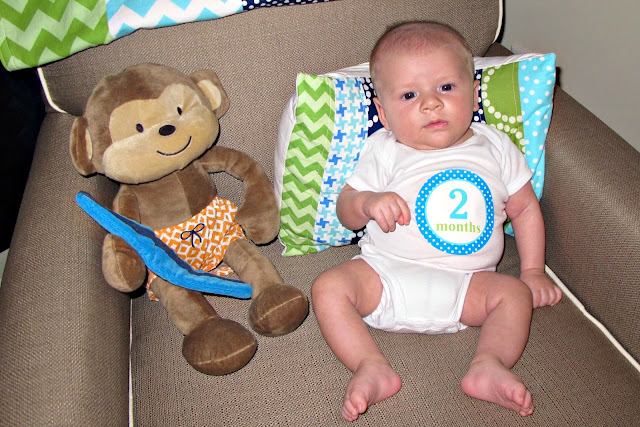 Clothes: Trace transitioned out of newborn onesies, shirts and sleepers and into 0-3 month at around weeks 5-6; however, he still wear newborn shorts and pants. My little guy's got a tiny hiney!

Health: Overall his health has been fantastic! But at around week 7 he started acting up, was extremely fussy, screamed a lot, looked to be in pain while eating, etc. We took him to his pediatrician and they thought it might be the beginning signs of colic or that he had acid reflux. We filled a prescription for Zantac, but never had to give it to him. Turns out it was just a short lived phase and he's been back to himself since. Must have been his 6 week growth spurt...

Diet: Trace takes 7 bottles/day - mix of breastmilk and formula. We switched him to Similac Sensitive, which has worked wonders for his little tummy and we use Little Remedy's Gas Relief Drops in his last bottle of the night (we think it helps him to sleep longer stretches by settling any gas bubbles he may have). Trace takes 6 4 oz bottles and 1 5 oz bottle, which is his last bottle of the night at 9:00pm. We believe that this extra ounce combined with the gas drops helps him to sleep sound until the 3:00am hour. 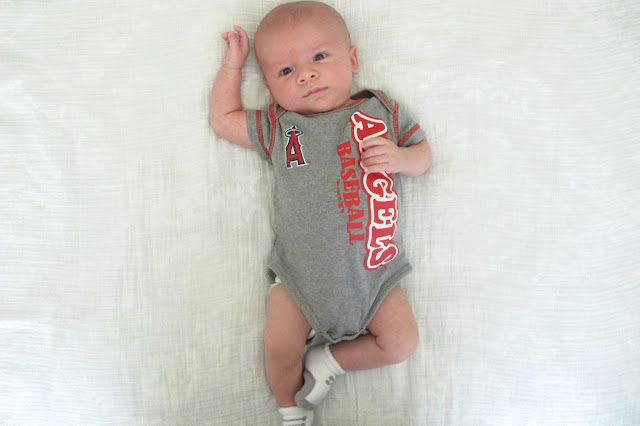 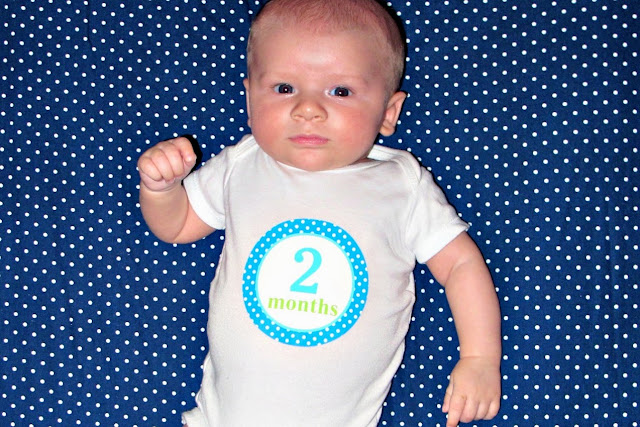 Likes: looking up (usually at the sky or the fan), sucking on his fists, eating, getting a diaper change, sleeping on someones chest, talking, to be bounced in someones arms or in his bouncer, pacifiers, middle of the night feedings, his car seat, bath time

Dislikes: getting his face wiped off after a nap, the feeling of frustration, when a bottle ends, wet/dirty diaper, when he can't find his fist

Crying: Trace always cries for an obvious reason - tired, wet/dirty diaper, hungry, frustrated, gassy, over stimulated, hot - which makes it somewhat easy to find ways to perk him up again. He isn't a boy who just cries to cry, thank God! 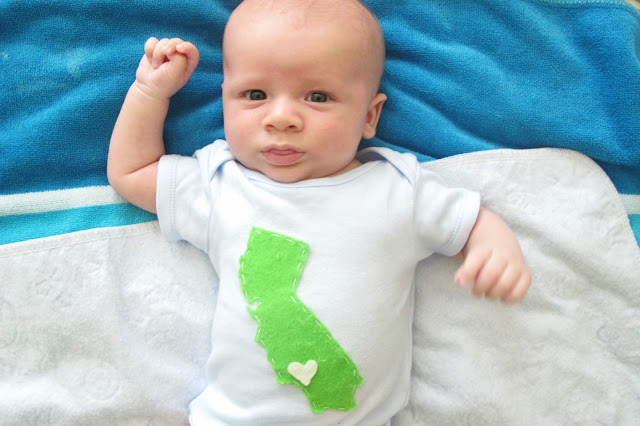 Milestones: trip to the mall, dinner out at a restaurant, baby acne pretty much gone, turns head from side to side with ease, talks all the time (baby babble), smacked crab toy with hand on stroller over and over (playing with it), scooting on his acitivity mat (generally out of frustration), tear duct completely cleared up, sticking out his tongue (mimicking), watches his toys move (tracking), sleep in crib 100% of the time... and my personal favorite, you SMILE so big now!

Social/Visitors: We've gotten out and about more in the past 2 weeks than we did for the 1st 6 weeks of Trace's life. Trace was 6.5 weeks when we went to the mall for the 1st time. We went with Nanny and Trace lasted several hours. I fed him, changed him and he napped like a champ... That was a milestone for me too :) Trace also went out to dinner for the 1st time -- Fox and Hound -- with us and my parents. He was awake the majority of the time and only fussed for a short amount of time before he dosed off. My parents are constantly babysitting him so that Bryan and I can either go out on dates or so that we can run errands. We had Bryan's fantasy football draft party, which was Trace's 1st party -- he was a little angel, staying pretty quiet and alert the entire time. 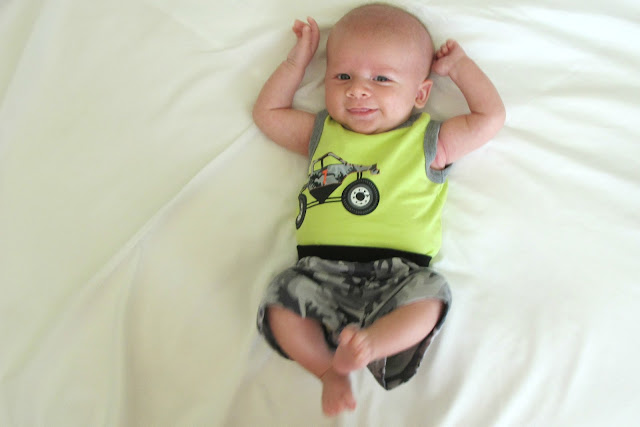 Postpartum: I feel 75% recovered from my c-section, but when I touch the area around my incision I realize that it's still numb, hurts and is totally swollen. I've started to walk around my neighborhood at 7 weeks postpartum, but I need to make a tried and true commitment to getting back into shape and stick to it. I continue to get so much sleep. Since Trace entered our world I have yet to be extremely sleep deprived. Sure there has been a day here or there, but honestly, I've only felt exhausted maybe 5 days in total and they were all during that first week home. I have to give myself a little credit here, for I do actually sneak in sleep when Trace naps, and this allows me to have more energy for him when he's awake.

Mommyhood: It's hard, but so amazing at the same time. I couldn't comprehend the love and sacrifice that takes place until I was in it -- wow do us mama's sacrifice a lot to ensure that our little ones every need is taken care of. My relationship with Bryan has changed drastically and I'm still trying to figure out how to be the best wife, mother and individual simultaneously. Mommyhood is an isulating job, but so incredibly rewarding. I'm beyond obsessed with Trace... and my family as a whole. I just can't believe I am so lucky to have Bryan, Cali and Trace in my life. I work everyday with Trace, helping him develop the skills that he should be mastering at this stage -- tracking, smiling, mimicking, head control, strength, etc. I have him on an eat, play, sleep schedule and I can tell that he thrives on this routine. He knows exactly when he eats and he sleeps so well at night, which in return makes him a happy and alert baby during awake time. Whether it's doing my hair/make-up for the day, blogging, laying out, surfing the web, playing with Cali, texting friends or catching up on one of my DVRed shows, while Trace naps in his crib I try to carve out some at home "me" time a few days a week. I need to incorporate working out into this more often :) 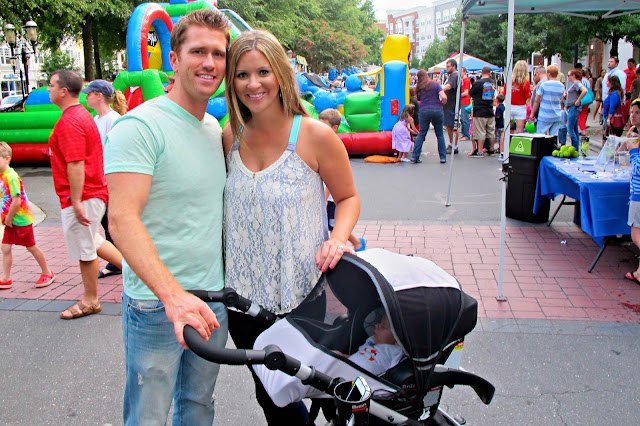 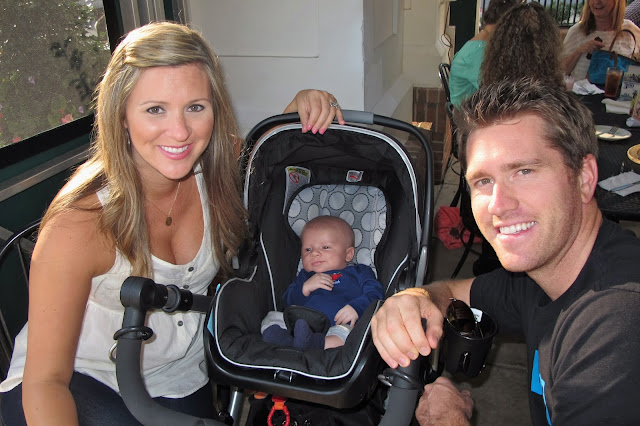 1st time at a restaurant 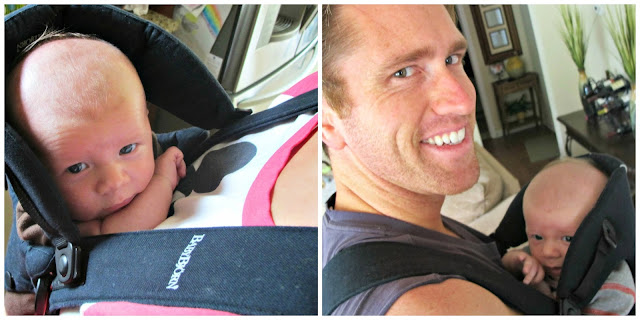 such a sweet boy in his carrier 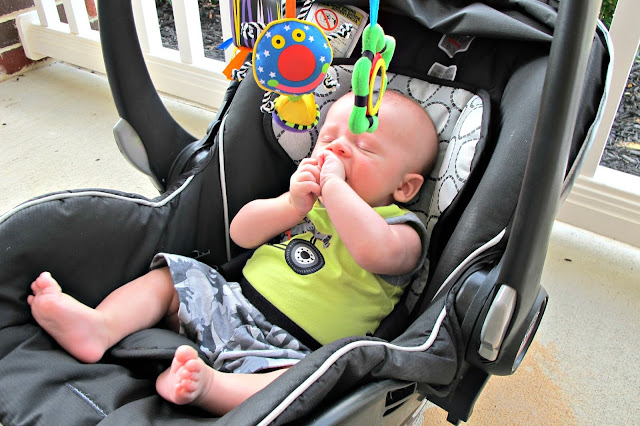 he loves to suck on his fists 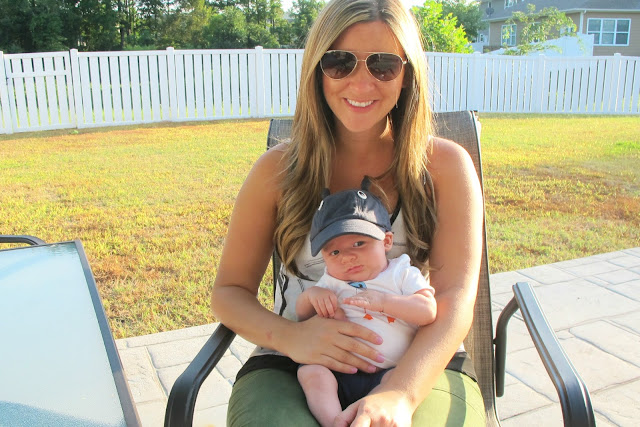