the truth about trace (and a glimpse into our daily routine)

Everyone hates a bragger.
Am I right or am I right?
So I'm going to give it to you straight.
This is the real, 100% honest truth about my little Trace Jameson. 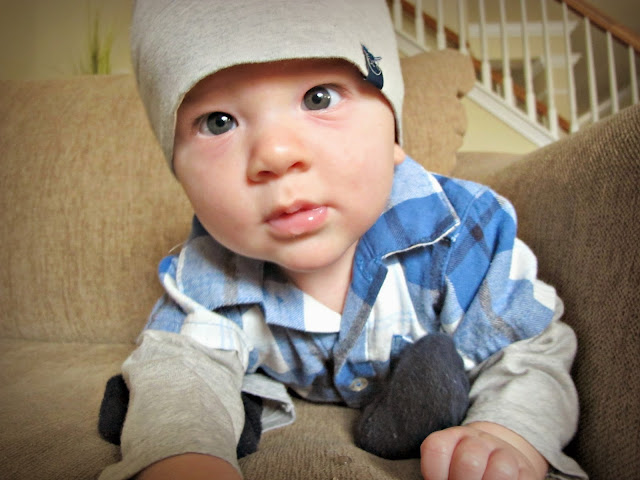 Trace wakes up sometime between 6:30am and 7:30am.
Roughly 4 mornings a week we have to wake Trace up at 7:30am or else he'll miss his 7:30am feeding.
Yes, we wake our baby up.
He loves to get his diaper changed and get his clothes changed.
He used to love his pacifier, but once he discovered his fingers they're all he needs.
Trace takes 3 naps everyday. In his crib.
I rock him to sleep in his room before every nap.
He doesn't cry before naptime.
He just yawns and puts his fingers in his mouth. That's his sign. Time for a nap.
He gets a bottle at 10:30am, 1:30am and 4:30pm every day.
And every day he wakes up from his nap at these times, because he knows when he's supposed to eat.
10% of the time he wakes up crying.
90% of the time he wakes up with a smile on his face.
Trace loves to smile and is such a happy kid.
When awake, he is so alert and loves playtime.
He likes to stand, stare at himself in the mirror and put every toy we own in his mouth.
His favorite toys are Freddie the Firefly, his rings and his Baby Einstein music player.
He's just discovered his feet and the fact that they're with him all the time.
He loves to play with his tongue.
His fingers and hands are his favorite thing to eat.
I am constantly cleaning his hands from saliva.
He drools like crazy and goes through approx. 5 bibs daily.
Trace gets fussy at 6:00pm and cries throughout the entire hour.
This is when we break out the Baby Bjorn or balance ball to bounce him.
Trace is tired at this point and just wants to go to bed for the night.
He gets a bath every other night. I mean, how dirty can a 4 month old get.
We start bathtime at 6:45pm.
Trace looooves bathtime.
He gets his bath in his bathtub on our kitchen island.
He's starting to splash so much and I always end up getting soaked.
I take Trace upstairs to get ready for bed.
I have to double diaper him because he pee's through 1 diaper and wets his jammies if I don't.
While I get Trace ready for bed Bryan makes his bottle and fills his vaporizer up with water.
Bryan kisses Trace good night and goes downstairs to clean up after Trace's bath.
I sit in his dark room, rocking and feeding him.
This is my favorite time of day.
Trace is fast asleep in his crib by 7:30pm.
The only white noise we give him is the subtle sound that his air purifier makes.
This early bedtime leaves the entire evening open for Bryan and I to spend quality time together.
Trace sleeps 11-12 hours a night without waking up once.
Sleep is not an issue in our house.
Trace is always rested. I am always rested. Bryan is always rested.
But Cali. Oh yes, Cali is always sleepy... that dog.....

And that is the real, 100% honest truth about my little Trace Jameson.
No bragging. Just shooting straight.
He's an angel. A complete angel.

Trace is the kid who gets 4 shots, cries for 30 seconds and then is his smiling happy self.
Shoot, I'd be crying longer than that if it were me.
He's a total champ.

Trace is the kid who starts to cry when I yell across the street to my neighbor "you look awesome!"
He isn't used to loud voices or yelling.
Even those simple, yet loud words scare him into tears.
Because he lives such a peaceful, structured, chill life.

Trace is the kid that will wear sunglasses on Halloween without a care.
He wore those sunglasses for 3 hours.
He never touched them. Not even once.
He left them on his face the entire time.
Even while trick-or-treating in the dark, Trace wore his sunglasses.
And he never fussed.

Trace is the kid who finds comfort in his mothers voice.
My horrible singing voice calms Trace like nothing else.
It warms my heart and makes me feel like the most important person in the world.
And when he looks at me?
Oh man. That look he gives me.
I can tell that I mean everything to him and he knows he has my whole heart.
Because he does. Trace has my whole heart.

I've never understood why so many females want daughters.
Sons are just as amazing.
Dare I say better.
Trace is sweet, gentle, playful and funny.
He is a really good little boy.
I love having a son and being a mom to a boy.
He is the absolute best thing that's ever happened to me.

And that is the real, 100% honest truth about my little Trace Jameson.
He. Is. An. Angel.
And I am so effed when I go and have my second child...