he didn't stop until they shot him

We left our hotel in Norman, OK at around 10:15am last Wednesday morning. Not even 15 minutes later, as we're cruising south on I-35, Bryan says "there are 2 cop cars coming up behind me." I make sure he wasn't speeding, which he wasn't. Then out of my side mirror I see these police cars make a sharp right to go down the wrong way of the freeway entrance.

Needless to say we were confused.

About 30 seconds later I look to my left and see a truck driving on the other side of I-35 going the wrong direction!

This truck was driving next to us, driving south, just like us. But it was in the fast lane on the northbound side of the highway.

Bryan and I were freaking out! I quickly started praying. Praying that no one gets killed. He was in the fast lane!

Next thing you know, this truck cuts across the lanes and continues driving south (on the northbound side), but is in the shoulder now. Thank God he's out of the traffic lanes, but what if someones changing a flat tire, or a big rig is broken down... what if?

We lost sight of the truck he was going so fast.

Next thing you know, police car after police car start zooming by in the lane right next to us (police cars in fast lane, us in slow lane). Police cars after police SUV's after undercover vehicles. They were traveling at extremely high speeds, attempting to catch up with this truck.

It was beyond wild!

Bryan and I started discussing what in Gods name was going on --- Was this guy high or drunk? Did he just rob a convenience store or gas station? How long had he been on the road like this? What the hell was going on?!

I was still praying.

About 20 police cars and 15 minutes went by. We were nervous. Did he exit off the highway? Were we going to see a large crash up ahead?

Lo and behold, we drove by the end result of the high speed chase and below is an article I found at KXII.com and pictures I was able to snap...


Wrong-way chase down I-35 ends with fugitive's capture in Murray Co.
MURRAY COUNTY, OK - A man who escaped custody in Louisiana led Oklahoma troopers on a high speed chase down Interstate 35 and didn't stop until they shot him.
Posted: 5:55 PM Oct 26, 2011
Reporter: Amanda Brown

MURRAY COUNTY, OK - A man who escaped custody in Louisiana led Oklahoma troopers on a high speed chase down Interstate 35 and didn't stop until they shot him.

OHP Troopers say the chase started Wednesday morning when they tried to pull Brian Soileau over on an outstanding warrant, but he took off. When Soileau moved into the northbound lanes and into oncoming traffic, troopers were authorized to use deadly force, and they did.

Authorities detained Brian Soileau near Davis late Wednesday morning. OHP says he took off around 11 o'clock Wednesday morning, driving 95 miles per hour south down I-35. When he crossed into the northbound lanes in Garvin County, Soileau put troopers, civilian drivers, and everyone who stood in his way in serious danger.

"It's a miracle. Just a there's no other way to put it, just absolutely the grace of God that kept this man from killing somebody or multiple people today because he showed absolutely no regard for the safety of anybody else out here on the interstate," OHP Trooper Betsy Randolph said U.S. Marshals say they spotted Soileau at a Lowe's Home Improvement store in Norman. The escaped inmate from Evangeline Parish, Louisiana, was facing a life sentence for aggravated burglary there, and was also wanted for a bank robbery in Texas that happened Tuesday.

After a 30 minute pursuit, OHP troopers shot Soileau, and he crashed the stolen pickup he was driving. U.S. Marshal Michael Parks says the cooperation of OHP was vital to catching the escaped inmate.

"With these other agencies that make it possible for us to do what we do, because without the help of the troopers who knows how this would of went, but with their efforts and the help they gave us it was a good thing that it turned out as well as it did where no one got hurt," Marshal Parks said.

Soileau was flown to the OU Trauma Center in Oklahoma City with a gunshot wound to the stomach. No word on his condition tonight.

This high speed chase was way worse than we could have ever imagined!

Undercover vehicles and cop cars speeding by us faster than I've ever seen any car drive on a regular highway in my life! 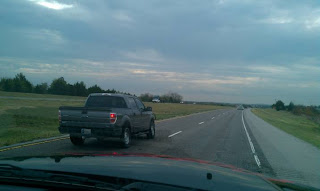 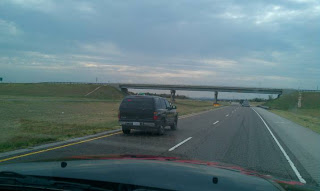 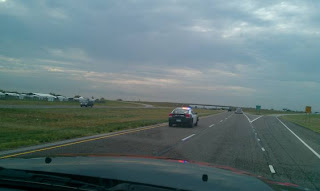 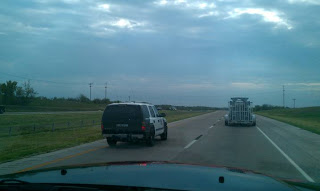 This is the end of the chase... off the bank of the highway, where the shots were fired and where the fugitive was shot 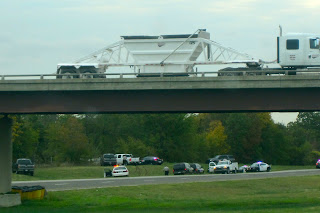 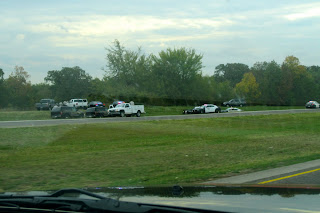 You can see the fugitives truck here, but it's hard to point it out. It's pretty hidden in the brush, but is a gold pick up truck behind the police car on the left in the foreground. 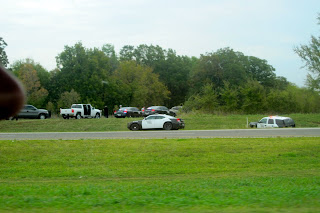 The beginning of stopped traffic on the other side 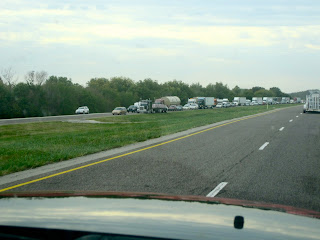 People often ask Bryan and I "What's the craziest thing you've ever seen on the road or in your travels?" We'd never had a good answer until now!